The Mangalarga is a horse breed that was originally developed in Brazil by Francisco Gabriel Junqueira, the Baron of Alfenas, when he began breeding Royal Alter stallions from Portugal with local colonial mares on his lands in Baependi County at Minas Gerais State.

The name Mangalarga comes from the Hacienda Mangalarga which acquired stock from Campo Alegre ( Gabriel Francisco’ breeding farm) and awakened interest in the horse among local ranchers. The horses smooth, cadenced and rhythmic gait, the marcha, contributed to the second name the Mangalarga Marchador was created.  The first association for the Mangalarga Marchador horse was founded in 1949 to set standards in confirmation, disposition, and gait. From these early beginnings, the Mangalarga Marchadorhas been selectively bred for over 180 years and it is said that no other breed has been crossed in. Genetic studies of these lines show many species with very little or no outside influences. These lines proved to produce horses that were sure footed, graceful, comfortable and of excellent temperament.

The Mangalarga Marchador is between 14.2 and 16 hands, weighing around 1,000 pounds.  Most colors are represented in the breed, with grays, bays, and chestnuts being predominant. Horses smaller than 14.2 hands are not being accepted for registration. The Mangalarga Marchador is intelligent, regal and docile with an undying stamina.   Rigorous tests including cross country, endurance, reining, and gait classed insure the breeding of excellent stock. Natural gaits are the walk, the marches, and the canter.  There are two different marcha types.  Which one is superior is subject to personal preference. 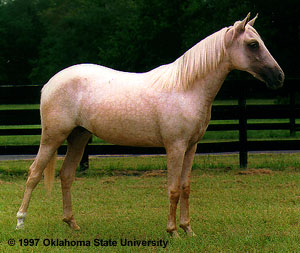 Of the two marchas, the marcha picada is a bit smoother. It is a broken pace and therefore creates little vertical movement, similar to the Paso Fino corto or Largo, and has also been compared to the Peruvian Paso Llano. The Marcha Batida is a diagonal four beat gait, similar to the Trocha in the Paso Fino breed.

The sturdiness of this breed can easily be noted as one observes its great adaptability to any type of adverse terrain or climate, be it tropical, temperate or cold. Its endurance is demonstrated by its capacity  for traveling long distances without fatigue. The Mangalarga Marchador is not a demanding feeder, surviving well on a regime of either partial stabling or open field which, for the owner means low cost and freedom from the usual problems caused by diversity of pasture. It is also quite resistant to disease and parasites.

The breed can now be found in Germany, Portugal, Italy, Spain, Switzerland, Holland and many South American countries. Mangalargas finally arrived in the United States in 1991.