Located along the border of France and Spain is a scenic and mountainous landscape offering a variety of outdoor activities including hiking, skiing, mountain climbing and observing wildlife. The park was created in 1967 as a natural heritage site without barriers or fences where animals are totally free. Devoted to preserving biodiversity and landscapes, as well as studying wildlife and plant species, the park is home to 70 different species of animals. The eastern portion of the national park forms part of the French section of the Pyrénées – Mont Perdu World Heritage Site that straddles the border between France and Spain. The park also borders on the Lacs de Carnau. 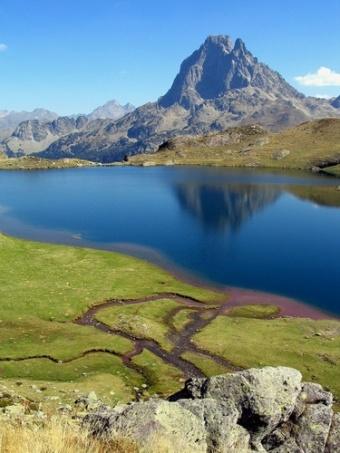 Park wildlife includes golden eagles, griffon vultures, bears, and the Pyrenean chamois. There are about 2,500 plant species; 200 are endemic.

The Pyrenean chamois , Rupicapra pyrenaica, is a goat antelope that lives in the Pyrenees, Cantabrian Mountains and Apennine Mountains. It is one of the two species of the genus Rupicapra, the other being the Chamois, Rupicapra rupicapra. It is in the Caprinae subfamily of bovids, along with sheep and goats. Up to 80 cm tall, its summer coat is a ruddy brown; in winter it is black/brown with darker patches around the eyes. Both males and females have backward-hooked horns up to 20 cm in length. They browse on grass, lichens and buds of trees.

Over the seasons, the Pyrenees give opportunities for relaxation and a whole range of activities. Coated in snow from November to April, there are Alpine and Nordic skiing resorts with ever improving facilities, for winter sports that are fun for the whole family. Green, yellow, ochre or grey, the Pyrenees change hue with every passing season, in the lofty prairies and rocky outcrops. Fauna and flora are protected – and not only in the Pyrenean national park, which is ideal for hiking, however fast you go. Blue lakes and torrents, much appreciated by anglers and white water sports lovers. Blue sky too for those who love hang-gliding and paragliding.Just a 3-hour drive from Bordeaux or Toulouse and 60 kilometres from Pau railway station and airport.

The famed pilgrimage site of Lourdes is only about 20 miles (32 kilometers) from Pyrénées National Park, and the town is a stop on France’s TGV high speed railway. From Lourdes buses and private transportation are available to villages near the park itself. The mountain wall of Pyrénées National Park makes up the French/Spanish border and a scenic road trip through one of the alpine passes (when open) is a worthwhile journey in its own right. But everything is a bit different on the other side of the range, from the language to the climate, and some exploring on the Spanish side of the mountains is a worthwhile addition to any itinerary.