The American Mammoth Jackstock was developed in the United States by cross-breeding of large European donkeys with American and Mexican stock. These donkeys were initially bred before the Revolutionary War. They became valuable for their ability to sire mules with size, strength and vitality for use in agriculture and transportation.

George Washington received an Andalusian jack and two jennets from the King of Spain in 1785, marking the beginning of good fortune for the Mammoth Jack. These quality donkeys became the foundation stock for the modern Mammoth Jack breed. Types arose within the Mammoth Jack breed as a result of the different kinds of mules needed in various areas of the country. Other circumstances also influenced regional type when it came to Mammath Jacks. The result is that several different types of Mammoth Jacks can be seen today.

Mammoth Jacks are listed as “threatened” by the American Livestock Breed Conservancy. Males are rarely gelded because of the animal’s value as breeding stock.

If you are interested in buying an American Mammoth Jack, check the link below: 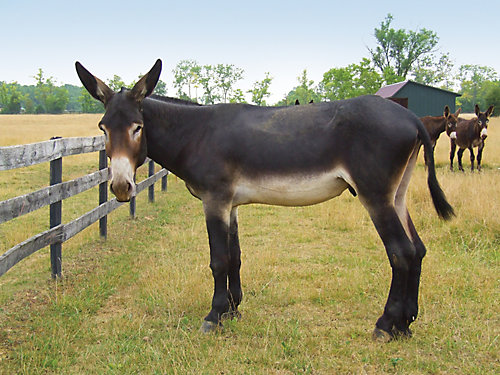