The Bracco Italiano is a breed of dog developed in Italy as a versatile gun dog.

In his native Italy, the Bracco Italiano is known as a hunting dog breed, but he’s also gaining notice as a sweet and affectionate family companion. With his long ears, droopy lips, and soulful expression, the Bracco Italiano has a distinctive look. He’s believed to be an ancient breed, dating back to the fourth or fifth century B.C. 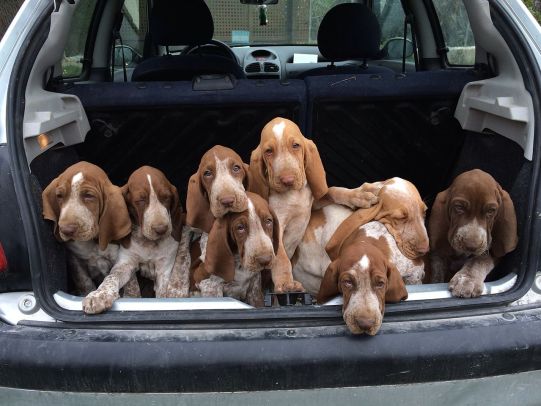 The Bracco – or Italian Pointer- should be athletic and powerful in appearance, most resembling a cross between a German Shorthaired Pointer and a Bloodhound, although it is nothing like them in character. It has pendulous upper lips and long ears that create a serious expression. It should be “almost square”, meaning that its height at the withers should be almost the same as the length of its body. It should not however be actually square as this would render its famous rear driving push off and front/rear extension to be compromised, thus losing much of its powerful grace.

They enjoy being cuddly lapdogs, despite weighing between 55 and 88 pounds. Yet they also must feel useful. Bracci are happiest in a home where they can channel their energy into regular activity and exercise, such as fieldwork and other canine sports. If not given a task, the Bracco will make up his own fun.