Dog Pretends To Drop Toy In Pool So Other Dog Jumps In!

This dog is the king of trolls! He managed to play a clever trick on his friend. The quick-thinking dog pretended to drop a toy in the swimming pool, but what happens next is brilliant.

The video shows two dogs standing in front of each other at either side of a pool. Apparently, they were both after the same toy, and one of them had already taken it. But this pooch wins the battle by tricking his friend with a sneaky swimming pool prank. 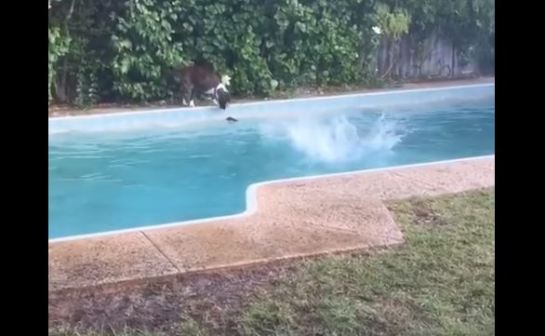 The clever doggie pretended to drop the prized toy into the pool so the other dog would jump in spotting a chance to claim the toy. The other canine immediately dives into the pool and swims over to claim his prize.

Although, it was all part of the trick because that gave him the time to took his toy back and escape victorious from his dog friend. I didn’t know dogs could be that vicious and bright!

He clearly got one over on his canine friend in the best and wettest way!