This Is How Clams Bury Themselves In The Sand

Wow, I been alive this long and it’s the first time I’m seeing that, and I’m both disturbed and fascinated by it. I had never witnessed a clam bury himself before, he makes the weirdest sound and looks kinda of gross. But still, so wonderful.

Watching sea wildlife is like discovering a new type of alien every day, they are such intriguing and interesting creatures. So different from us, yet, they deserve the same the respect and admiration we give to the rest od the wildlife. 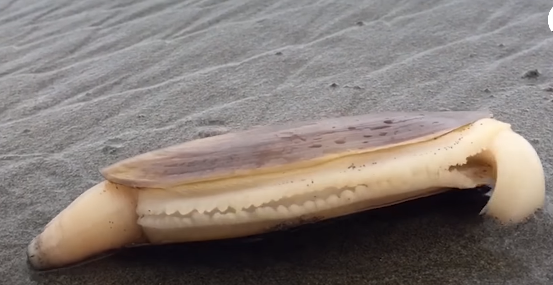 The video shows a clam on the sand burying himself. First, he handles his “foot” to act lick an ankle on the sand and help drag his shell under the sand.

Then, when he is almost under the surface, he releases wastes (mostly water and sand) from his other “foot” (?), so he won’t carry it with him in his hideaway.

Isn’t he a cute tiny buddy?

Awesome video!! but, don’t know what to feel about seafood anymore…

Puppy Trying To Get His Treat